One of the most infamous of pests, the scorpion is one of the most difficult to eliminate. They spend most of their time tucked away in cracks or crevices and are even found in children’s sand boxes.

Most of the scorpions that enter homes are not poisonous; but if you are unsure, it's better to assume they are poisonous. Of the estimate 1,400 species of scorpions, only about 20 to 25 can inflect potentially fatal stings. In the US, only one species of scorpion (the bark scorpion) has venom potent enough to cause severe reactions. Scorpion stings are most serious in young children, older adults, and pets.

It's important to seek out immediate medical care if a child is stung or if you experience any serious medical symptoms, such as breathing difficulties and difficulty swallowing.

Scorpions' body structure is relatively consistent across different species. All have eight legs and two pinches. They have a long slender body with a segmented tail that can be arched over their back, curving up over their body. The tail is tipped with a venomous stinger which is used to kill or paralyze its prey.

Fun Fact: Scorpions "glow" a bright green or yellow when seen under a black light. This makes them relatively easy to spot in the dark.

Scorpions don't like temperatures over 100 F, so it's not uncommon to find them burrowed down in the soil, sand, under rocks, or in other shady, cool spaces. Scorpions typically entered structures seeking out water and shelter. In homes, they are most often found in undisturbed areas such as attics, closets, seldom-used shoes, or folded clothing. In the evening, scorpions venture out in search of food and water. As a result, they can sometimes be found in the morning in bathtubs and sinks that they were unable to escape.

Scorpions mainly feed on small spiders and insects, but also enjoy a variety of crickets, earthworms, and other scorpions. While they have a well developed sense of hearing, they have poor eyesight and rely on sense of touch for navigation and hunting. Even though scorpions are equipped with venom for defense, they can fall prey to predators such as bats, centipedes, lizards, mice, owls, and tarantulas.

Homeowners can minimize scorpion encounters though:

Our pest professionals have the expertise and experience to safely remove scorpions, and their food sources, from your home. Click here to learn more about our Four Seasons Pest Control Program and how Truly Nolen of Lubbock can help rid your home of pesky scorpions. 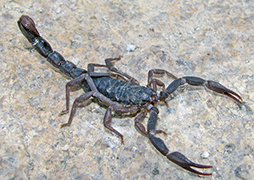