While there are more than 10,000 ant species worldwide, only about 25 species commonly infest homes.  Ants can range in size form 1/12 to 1 inch (2 to 25 mm), depending on the ant species.  A close relative of bees and wasps, ants can be identified by their three distinct body regions: head, thorax and abdomen, as well as antennae. Ants have a narrow "waist" between the abdomen and thorax, large heads, elbowed antennae, and powerful jaws.
Ants are social insects, which mean they typically live in large groups or colonies. These colonies can consist of millions of members, depending on the species of ant, and can be located underground, in ground-level mounds, or in trees.
Let's take a look at the most common ant species impacting Knoxville, TN:
ACROBAT ANTS
Acrobat ants get their name from their ability to acrobatically raise their abdomen over their thorax and head as if they were performing a balancing act, especially when disturbed.  This ant is best identified from above, as it gives the best view of the telltale heart shaped abdomen.
ARGENTINE ANTS
Common in urban areas, Argentine ants can easily adaptable and can nest in a variety of places.  Colonies are massive and may contain hundreds of queens.  Nests are usually located in moist soil, next to or under buildings, along sidewalks or beneath boards.  The foraging trails of Argentine ants are their most visible sign.  They travel with well-defined trails between their web of nests and their food sources.  The trails can be observed traveling up buildings, trees and into homes.
FIRE ANTS
Fire ants are common in the southern half of the US. They are a very active, aggressive, and resilient species of ant. Preferring dry, sunny, and flat conditions, they typically building their nest mounds in the ground near landscape areas or structural foundations as loose earth is preferable for mound construction. At times, nests may appear as visible cone-shaped mounds that can grow to be larger than two feet in diameter and seven to twelve inches high. These large mounds help colonies regulate the temperature of their tunnels, allowing them to survive severe drops in temperature.
ODOROUS HOUSE ANTS
The odorous house ant is a common ant throughout North America and frequently considered a nuisance in homes.  They can build nests in a wide variety of places and their colonies can contain as many as 100,000 works and numerous queens.  They are also highly tolerant of other ant species and occasionally live in compound colonies with other ant species. Worker ants can follow long foraging trails and feed on sweets, meats, fats, and grease.  The most obvious identifier, however, is the odor of rotten coconuts when the ant is crushed.
PHARAOH ANTS
Pharaoh ants are present in many parts of the world and are one of the more common species of household ants.  They also carry the dubious distinction of being one of the most difficult household ants to control, as they have the ability to survive indoors.  This ant is considered a serious pest simply due to its ability to get into things and will consume all types of foods, especially sweets and, sometimes, other insects.
Click here to learn more about our Four Seasons Pest Control Service Program and how Truly Nolen of Knoxville can help you get rid of pesky ants. 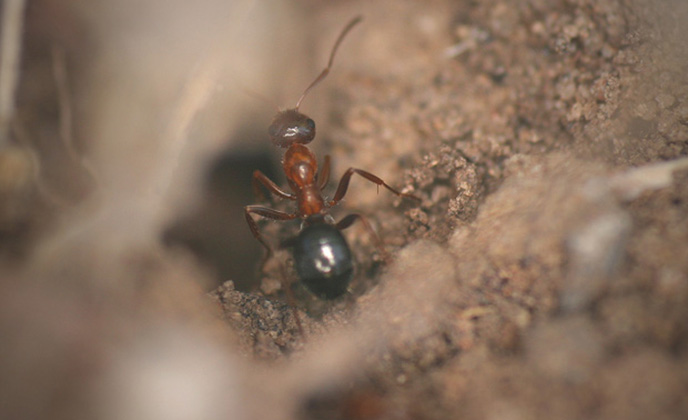 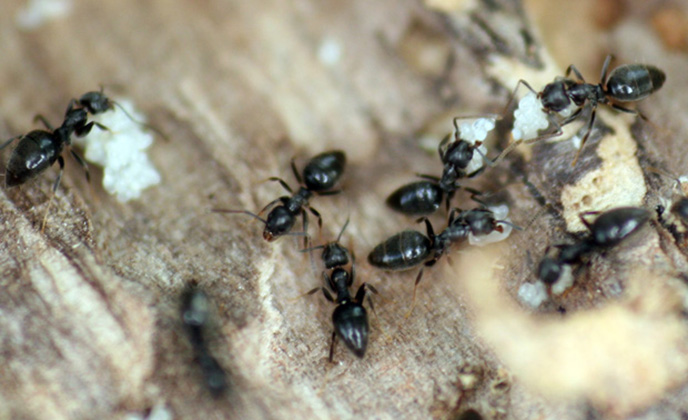